How do you go about owning land in Nigeria? 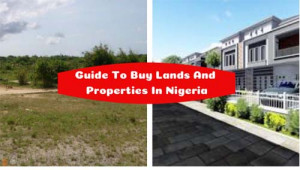 We will talk about the following:

Communal land tenure system promotes the community as the governing power of the land. The head of the community decides the basis for land sharing or ownership.  This system encourages large scale farming but cannot be used as collateral for a loan.

In inheritance tenure system, land ownership is transferred at the death of the main owner to the next of kin. This system provides for children yet unborn but sometimes land allocation may lead to conflicts among beneficiaries and other family members.

The leasehold tenure system is an ownership of a temporary right to hold land in which a tenant holds rights to the land by some form of title from a landlord. This system allows for permanent crop cultivation depending on the lease period but it cannot serve as security for loans.

Gift tenure system of land ownership in which rights to a piece of land is voluntarily given out by the owner to another person.  It can be used to source for a loan from financial institutions by the new owner although the land ownership can be revoked by a court order.

In rent tenure system a tenant pays some amount for the period of using the land to a stated landlord. The period of rent is relatively very short compared to leasehold systems. Although this system discourages long-term plan on the part of the tenant.

In freehold tenure system, a person pays a certain sum of money for the right of ownership of a piece of land. Under this system, land can be used as collateral for the loan but the purchase of these lands under this system is expensive.

Tenants at Government Will

Tenants at the government will system is whereby land is given out to farmers by the Federal Government of Nigeria. The land is cheap to acquire although the land cannot be used as collateral for the loan.